No-Calorie Sweeteners: What You Need to Know 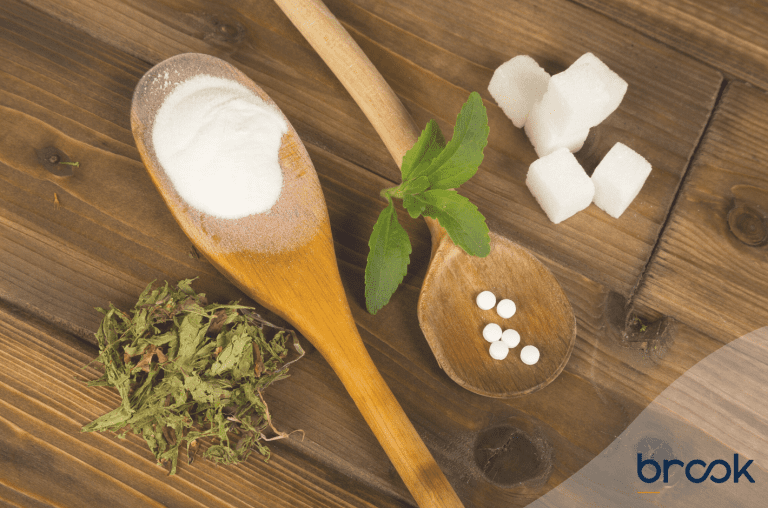 There are so many options available for zero calorie sweeteners these days. Some are man-made and are called artificial sweeteners. Others are found in plants and then concentrated into super sweet drops or crystals. When it comes to zero-calorie sweeteners, not all are created equal. Let’s dive in and discuss a few of the most popular options.

Stevia is a sweetener found naturally in the stevia plant. In grocery stores you will find it as an extract, usually near the sugar. Stevia extract is made using high heat and chemicals to extract the sweetness from the plant, so while the sweet compound found in the leaves is natural, the way it is concentrated for use is not. Extracts may contain a blend of other artificial sweeteners such as erythritol, which is another zero-calorie sweetener discussed in this blog post. Still, stevia is safe to use in moderation.

Pro-tip: Stevia can handle hot temperatures and can be a good substitute for baking. Use a recipe that already calls for Stevia (as opposed to attempting to convert a non-stevia recipe) for best results.

Monk fruit is, like stevia, a no-calorie sweetener that is found naturally in a plant. Monk fruit sweetener comes from a fruit called lo han guo. The juice of the fruit is much sweeter than sugar, but because monk fruit juice does not store well, most store-bought extracts are combined with other sweeteners and chemicals. Pure monk fruit extract is available, so check the ingredients if you are avoiding artificial sweeteners. Monk fruit is considered a safe sugar alternative to use in moderate amounts, such as to sweeten your tea once a day. It can be found as Monk Fruit in the Raw or as PureLo in most grocery stores.

Most often found in diet beverages, this artificial sweetener is one of the most studied foods in history. While considered safe by the Food and Drug Administration, recent research has shown that this sweetener may in fact not be the safest product after all. Studies have linked aspartame to obesity, lowered immunity, kidney disease, and increased inflammation. This sweetener is best used, at most, infrequently.

Although Splenda is the most common form, sucralose is found in many sugar free gums, drinks, candies, and in many dental products as it has been shown to not cause tooth decay or negatively impact oral health. Nearly 600 times sweeter than sugar, this artificial sweetener is often mixed with other sweeteners to reduce its sweetness and make it more palatable. No harmful side effects have been linked to occasional use of sucralose.

This sweetener is known as a sugar alcohol, and is naturally occurring. Natural erythritol can be found in some fermented food products, but commercially it is made by using chemicals to extract it from corn. This sweetener is a safe sugar alternative, but may cause some stomach upset if too much (greater than 50 grams) is eaten at one time. New research has suggested erythritol might be an antioxidant, but because more research is needed to determine the risks and benefits of erythritol. For now, it is best to keep consumption to one serving a day.

For more information on incorporating non-nutritive sweeteners, chat with us in your Brook app.

on March 23rd, 2020. Kelsea is a Registered Dietitian with her Master's degree in Nutrition from Bastyr University in Kenmore, WA, and is one of our Health Coaches.